StarExcursions
Home Blog The canary island pine resists fire: how can it be possible? 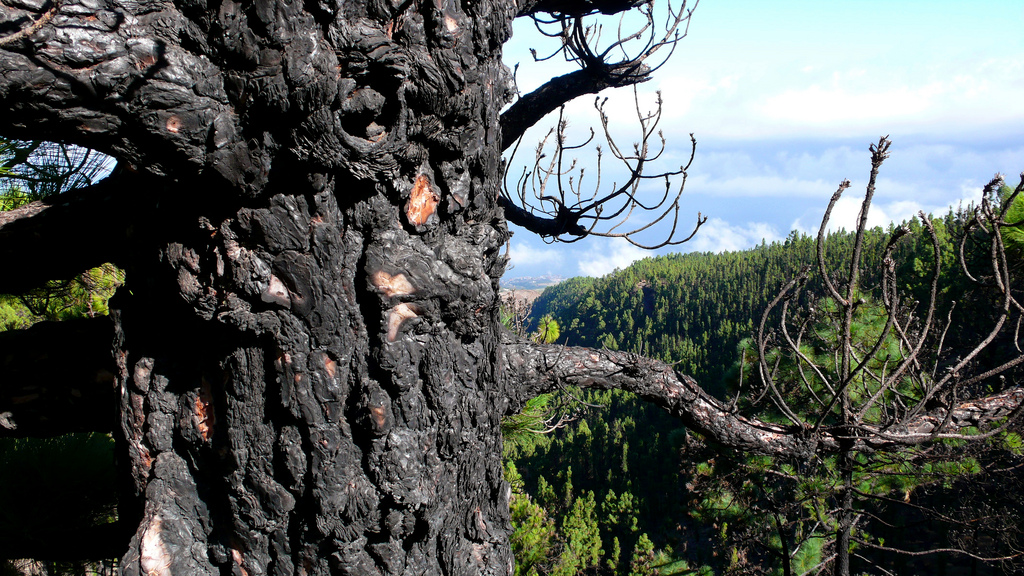 The canary island pine (Pinus canariensis) resists almost anything. As we already explained in this article that we dedicated to this tree, in which we did a general exposition about its main characteristics, we highlighted that the canary island pine resists fire. This characteristic is representative of this species, and it is so eye-catching that we consider it necessary to talk about this fact in deep.

This species of conifer adapts to every kind of orography and climates. This is why we can find this tree from the sea level to above 2000 meters high. It is an endemic species, and that means that it grows exclusively in a very concrete spot of the Earth: the Canary Islands. Nowadays, it grows in many other regions, but in all of them the human intervention was necessary. The Canary Islands are this concrete spot in which it grows. How is it possible that a species adapts to steep ravines or survives volcanic eruptions? And, most important, how is it possible that the canary island pine resists fire?

The canary island pine resists fire: this is its most charasteristic aspect

Its capacity to resist fire is very well known. It is the only species of conifer which is capable of doing this; in fact, the canary island pine almost regrows from its ashes. A very evident example of this situation occurred in Gran Canaria. During the summer of 2007, this island suffered a severe fire which burned 18.000 hectares. After this terrible event, the canary island pine was capable of flourishing, and it did it in only two years! And, after five years, the place looked as if it never burnt.

But, how can the canary island pine resist fire?

The fact that the canary island pine resists fire is a such a remarkable characteristic, that it has been studied in deep which ones are the mechanisms that allows this conifer survive fires. Some conclusions have been exposed:

The pine nuts are inside the pinecones, which can be opened by heat. When a fire starts, the pinecones open because of its heat and the pine nuts spread. These seeds also have an appendix. Thanks to this, they can be disseminated by the wind. In case there is a fire, new pines can grow in others parts of the region, far from this fire. Because of this fact, the species prevents the possibility of extinction by this kind of incidents.

This may be the key to understand this phenomenon. This conifer can maintain live cells inside its wood. In case this wood does not get affected by the fire, the pine can resprout once the fire has been extinct. It is believed that this is the main reason why the canary island pine resist fire.

Is fire harmful, or can it be beneficial?

One of the more extended debates surrounding the canary island pine is this question: is fire positive or negative for this conifer? We know it may sound crazy, but there are some arguments that justify this vision. To begin with, we have its great adaptation to flames.

This fact allows that fire provokes a natural selection, for it eliminates the ill trees, the specimens that are worse adapted to the habitat or to fire, and also stimulates the sprout of new pines.

Nevertheless, although these pines may be adapted to the presence of fire, the periodicity of these events is the key to solve the question. The canary island pine is adapted to sporadic fires that are caused by natural causes such as thunders or eruptions.

The human presence threatens the
survival of the canary island pine…

On the other hand, the canary island pine is not adapted to the human presence: nowadays, the majority of fires are caused by humans, either accidentally or willingly. These ones are produced year after year, so the pines have severe difficulties to recover in such a short period of time. As a result, in these cases, the presence of fire is harmful.

This fact is especially worrying when young specimens are involved, because they are the ones that are in more danger. Since they have not developed a proper bark yet, they are still not ready to face the damage that fire can cause. As a result, the new specimens that may sprout after one fire will not be ready to defend theirselves if a new fire gets started, because it will probably come much earlier than in natural conditions.

As a result, this periodicity puts the adaptation of the canary island pine in danger. Besides, the specimens who survive have suffered so much, that its growth stops, for the energetic cost would be too expensive for them. In these cases, they must focus on recovering their leaves first. This is not the unique problem…

The human influence does not end here. There are other activities that also affects these pines. The uncontrolled tree felling or the climate change itself affect directly to the survival of the canary island pine. Because of that, the canary authorities have had to publish a normative of conserving and repopulating. Fortunately, nowadays this species is well preserved in natural places such as La Caldera de Taburiente (the island of La Palma) and other Natural Parks of the archipelago.

Here it is where our study ends. It is very remarkable how the canary island pine resists fire, and especially those cases in which they benefit from it. The canary island pine is an endemism, which means that it is a very particular species of a very concrete geographic spot –in this case, the Canary Islands-. Because of that, it has a series of characteristics that are out of the ordinary. Despite its strong resistance, the canary island pine is not invulnerable, so all of us must protect it, in order to conserve it as one of the symbols that this archipelago has.