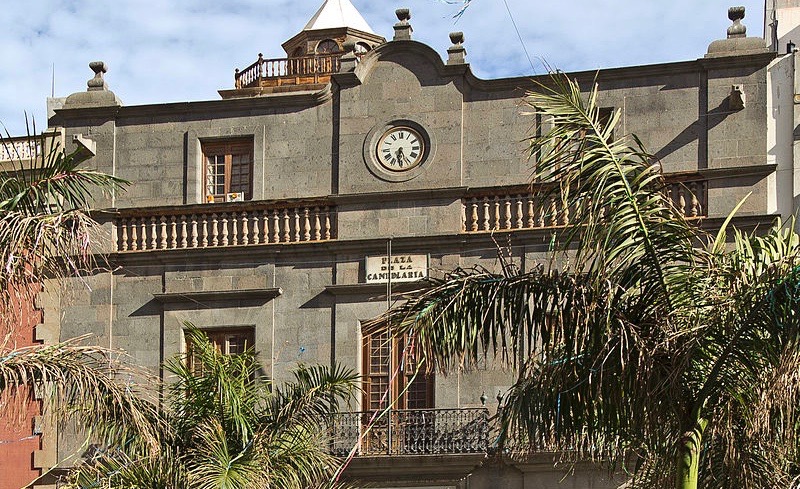 Palacio de Carta will have a new life

Palacio de Carta, the legendary building of Santa Cruz de Tenerife, which nowadays has no use and belongs to the Canary Government, will be rehabilitated. Its facilities will harbor the Tourist Information Office in the first floor; the second one will be reserved for the Museum of History of Santa Cruz.

The Palace will recover its lost protagonism

This information, which was announced at the end of May, has been the reason we needed in StarExcursions to talk about the legendary Palacio de Carta, at last. This building is one of the architectural wonders of the island, and also a touristic spot of total relevance. Would you like to know what makes it so special? Continue reading and you will find it out.

The History of Palacio de Carta

Palacio de Carta is one of the most popular civil buildings from the Canary Baroque. Its building started in 1721 and finished in 1752. As a result, the front of the palace is a mixture of baroque and neoclassical, two artistic movements that coexisted during the 18th Century. The front is made of stonework, which makes it the only building from this century that has is in Tenerife. Its singularity made Palacio de Carta one of the main places of the city during the 18th Century, and ever since has been an icon of Santa Cruz. During its three centuries of life, it has been the headquarters of the Civil Government, as well as of the Canary General Captaincy -not less than 19 General Captains have lived there-, and even the headquarters of the Credit National Bank during the fifties.

The person responsible for its building was Matías Rodríguez Carta, who ordered the construction and then used it as his family residence. The French architect Francisco de la Pierre designed the palace. He developed a three-floor building with a basement. However, the most remarkable elements, apart from the front, are the two big inner courtyards, which are built in the canary traditional style, characterized by the extensive use of masonry and wood.

Palacio de Carta was constructed over an ancient building, from the 16th Century, and it is placed in La Candelaria Square, the most centric one of the capital. Concretely, it is placed just in front of the Chamber of Commerce and the monument called “The Triumph of La Candelaria”. It was declared as an Asset of Cultural Interest in 1947. It was the first building of Santa Cruz that received such a mention, as well as it was one of the first in the Canary Islands. On July the 18th 1936, there was a putsch in Spain, so the military forces took the building by force. Later, in 1945, after having been abandoned for many years, the palace was acquired by the National Credit Bank, institution which made a huge reform in it. Palacio de Carta belonged to the bank until 2007, the year in which the Canary Government bought it. They paid 5.8 million euros. Ten years later, in 2017, this very public institution has just proposed a new reform in the building, a work that will make the palace a useful place again.

The reformation of Palacio de Carta

As it has already been explained in this article, the Canary Government has come to an agreement to remodel the Palacio de Carta, in order to give the building a new use. In the first floor there will be a Tourist Information Office, while in the second floor the Museum of the History of Santa Cruz.

We must add that this will be the new home for the Tiger Cannon, one of the most well known of the many that were involved in the defense against the almirant Horatio Nelson and the British Navy. Legend states that the Tiger Cannon was the one that provoked Nelson the loss of one of his arms -of course, the story cannot be proven.

The strategic plan to restore the building was presented by the architect Carlos Pallés. Then, publicly, the Cultural Heritage general manager of the Canary Government, Miguel Ángel Clavijo, was the person who presented the plan to the population. The city mayor, José Manuel Bermúdez, was present, as well. The reform has a 1200000 euro budget and has been split in two phases. The first one is expected to be finished in 2017. In case this happened, the first floor would be open this year. On the other hand, the second phase will restore the second floor, but in this case there is no finishing date.

After this agreement between the Government, Cultural Heritage and the architectural firm, the first one has come to another agreement, in this case with the Santa Cruz Council. The idea is that the Council manages this building in the future. The president of the Government, Fernando Clavijo, presided the signing of this agreement, in which also took parte the Treasury Counselor, Rosa Dávila, and the city Mayor, José Manuel Bermúdez.

The Government and the Council
have come to an agreement

In this agreement, limits and guarantees of this cession have been established. With this act, the Canary Government makes sure that this historic building will be for public use only, in order to make it accessible for every citizen of Tenerife. On the other hand, with this reform, Palacio de Carta recovers its magnificent essence and importance in Santa Cruz.

The President of the Canary Government has shown his approval towards the request made by the Council, for the will

“is not only to recover a building for the public use of it, but also to create activity and jobs, and to be respectful with our identity and heritage; to not lose our origins”.

On the other hand, the Council, represented by its top executive, has celebrated the achievement of what for them was an “old aspiration”. They will recover the functionality of a “remarkable building” of the capital, which has a “priceless” value. Palacio de Carta is a symbol of Santa Cruz and also of the island of Tenerife, so this decision of restoring the building and make it a useful public space is, undoubtedly, an excellent one. Not only for its historic value, but also for its potential use, in StarExcursions we would like to point out the importance of this happening. Now, the only thing left is that you visit it!

The images from this article have been obtained from Wikipedia’s database.