StarExcursions
Home Blog Solar eclipse 2017: This is how we lived it from The... 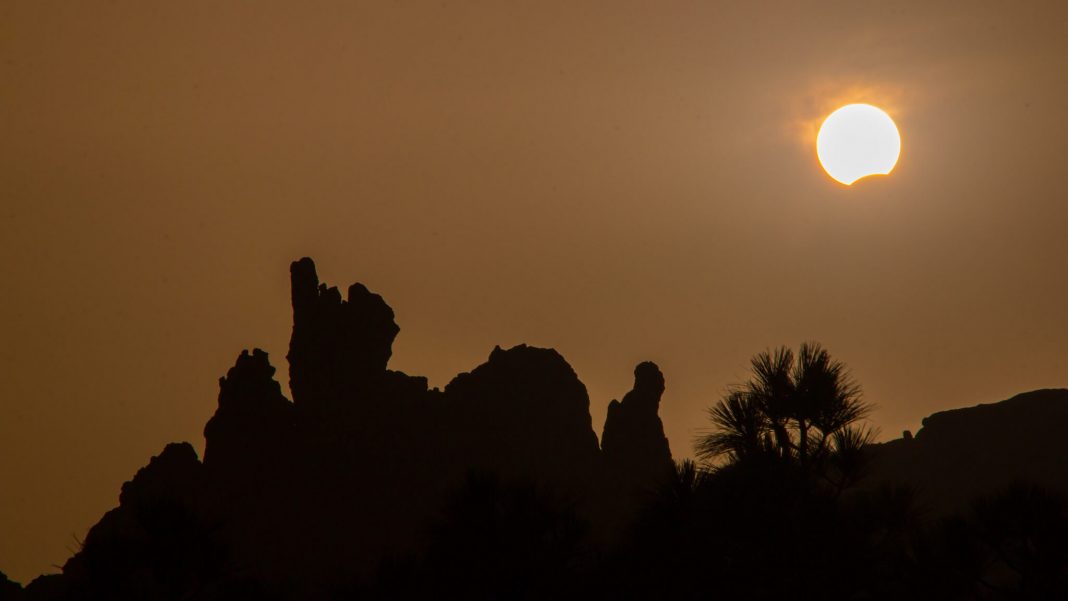 On Monday, the 21st of August 2017 happened one of the most impressive natural phenomena: a solar eclipse. The best place to watch it was in the geographic region of the United States. There, the solar eclipse 2017 was a total one, which means that, in many places of this region, the sun was completely covered.

In Spain we had less fortune, because here the eclipse was a partial one. The city where the sun was covered the most was Vigo, with only a 12% of it. But, if we talk about not only the Mainland, but also the archipelagos that belong to Spain, the situation was quite different. Here, in the Canary Islands, the solar eclipse 2017 was bigger, up to the 40% that was registered.

Why the total solar eclipse happened
only in the United States?

After having read the first paragraph, you might have wondered why was it possible. The answer, in fact, is quite simple: because of the trajectory that the sun describes over the Earth through the day -even though, as we all know, the Earth is the one which orbits the sun-, and also the trajectory of the moon over the Earth. These two trajectories matched last Monday, and, as a result, an eclipse occurred. This event happened at a 100% at the geographic region of the United States, so this is why it was able to watch a total solar eclipse there, and only a partial solar eclipse in other regions of the Earth. The solar eclipse 2017 was initiated at a point of the northern Pacific Ocean, in the west coast of the United States, and it progressed southeastward through the country. The first place in which the eclipse was visible was in the state of Oregon, and the last one was in South Carolina. Afterwards, it continued its trajectory over the Atlantic Ocean until it disappeared during the afternoon near Cape Verde.

But, what is exactly a solar eclipse?

Another frequently asked question is to wonder what an eclipse consists of. As we have already mentioned, the sun and the moon intervene, but, in what way? This combination is, in fact, easy to understand. Basically, what happens is that, while the sun is shining over a half of the Earth -for example, the United States-, the moon places between our planet and the star. As a result, darkness comes to this region of the Earth, because the moon is in the middle. And how can the moon appear and cover the sun?

The moon has always been the queen of the night. Every time the sun sets, the moon receives all of our attention. However, the moon is in fact present during the day; the thing is that we are not able to see it. This happens because there is so much light that the moon gets invisible for us, but it is in fact there all the time. Almost the only moment when we can watch it during the day is, precisely, when a solar eclipse happens.

During one of its orbits over the Earth, if the trajectory matches the one that the sun has, the eclipse happens, because the moon is much closer to our planet than the sun is, so it is able to cover the shiny star for a moment. The solar eclipse 2017 from Spain

As we have already explained, in Spain and in the rest of Europe, as well as in Central and South America, the solar eclipse 2017 was a partial one. As a matter of fact, in Spain has a low magnitude partial eclipse. This is so because the solar and moon orbits did not match at these geographic regions. As a result, from the perspective of these regions, the moon was not able to completely cover the sun, so part of the star was still illuminating the Earth.

What you see if you are at one of these places during the stellar phenomenon is a part of the sun covered by a black round object -the moon-. In this cases, if the eclipse is a partial one, you cannot feel the difference, because there still a lot of light coming towards the Earth. The solar eclipse 2017 from the Canary Islands

The geographic place of the Canary Islands is quite different from the one that the Mainland has, so it was easier to watch the solar eclipse 2017 from here. This happened because the archipelago is closer to the trajectory of the eclipse, so the partial eclipse we were able to watch from here was bigger than the one observed from the Mainland. For example, the city of the Mainland where you were able to watch it in a better way was Vigo, but only the 14% of the sun as covered, and in the capital of Spain, Madrid, the percentage was only 10%. In the Canary Islands, the percentage of sun covered by the moon was about 40%, being bigger in the western islands. This is why in Lanzarote, which is the most oriental island, the percentage was quite smaller (33%) than in La Palma (42%), the most occidental one. As a result, the eclipse was visible in Lanzarote for only 33 minutes, while in La Palma it lasted 50 minutes.

It is worth mentioning that, being a low magnitude solar eclipse, there was no luminosity nor temperature decrease during the event. As a result, the eclipse was only visible if you looked directly to the sun.

When will the next solar eclipse happen?

The next total eclipse in Spain will happen in 2026. Concretely, during the 12th of August. However, in the Canary Islands, given its different geographic situation -next to Africa-, the eclipse will be seen differently. Although the archipelago will have a notorious solar eclipse as well, it will be a partial one, as well as the recent one.

This has been our approach to the solar eclipse 2017, which happened on Monday the 21st of August. Although it was a total eclipse, it was only possible to observe it that way in the United States. In Europe, and in Central and South America it was only a partial one. Inside Spain, in the Canary Islands we have been lucky, because it was the Spanish region in which the eclipse was more intense. The maximum was registered in the island of La Palma, where the percentage of the sun covered by the moon was up to 42%. In StarExcursions we would like to promote everything related to the sky, because the Canary Islands are an ideal geographic spot to observe everything that happens in space!